Dave has been instrumental in the successful growth of the Bulk Materials Department. Establishing Starclean, Centrax and Spill-Ex products in the UK to deliver significant conveyor improvement for our customers.

Dave Patterson, who has spearheaded the development of our Bulk Materials Department, has announced his retirement after a long and successful career in the industry.

We’re sad to say goodbye to Dave, who has created a fantastic team and been a great colleague to work with.

As General Manager of our Bulk Materials Department, Dave has been instrumental in the successful growth of the department and establishing Starclean, Centrax and Spill-Ex products in the UK, to deliver significant conveyor improvement for our customers. 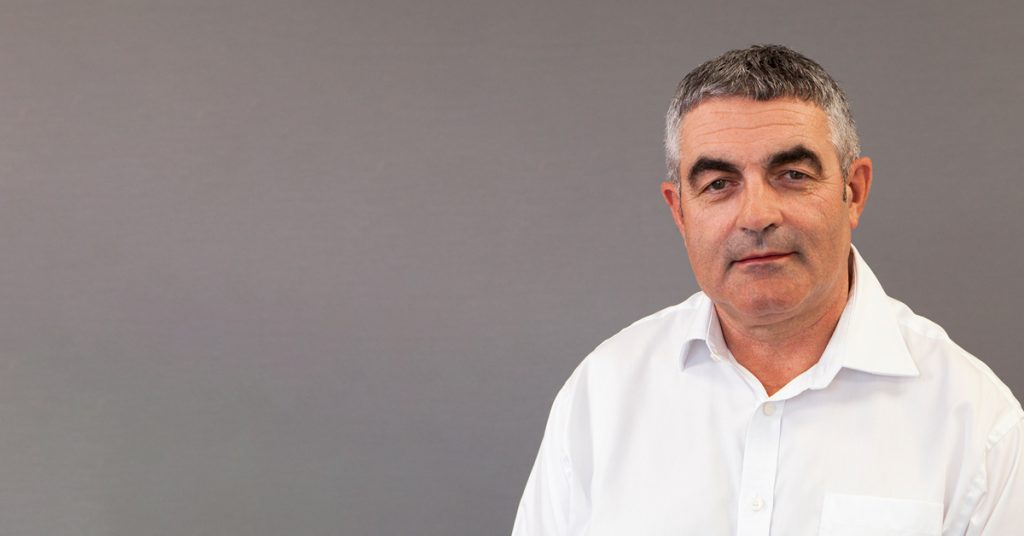 Starclean in particular, which cleans the conveyor belts by reducing and/or eliminating material carry-back, has become a respected player in the industries ConSpare and ProSpare serve. Under Dave’s leadership, we have installed over 900 cleaners at sites across the UK since it was first introduced five years ago.

Over 40 years in the industry, improving conveyors

Dave, who began his career as a mechanical apprentice with the National Coal Board, has worked for a number of leading companies in the material handling industry over his varied career and gained an excellent reputation for his expertise in engineering and conveyors.

Although most of his working career was spent in the UK he also worked on projects in other areas of the world including India, China, Poland, Saudi Arabia, Oman, the UAE and the USA.

Dave originally planned to retire five years ago, until a chance meeting with ConSpare Managing Director James Bullock at a Materials Handling Engineers Association (MHEA) event led to a new opportunity. ConSpare regularly received feedback from clients that conveyor belt performance was a big problem on concrete plants. Although highly experienced in all other stages of the concrete production process, we were not active in improving the performance of belt conveyors. However, as a well-known process improver, we were challenged to do something about it.

Having found a new problem-solving conveyor product in Europe, ConSpare needed to build a team to service the UK market. Dave then joined to head up the newly formed Bulk Materials Handling Department.

“James contacted me – and I felt myself being pulled back in. But I said I would only come here if I believed in the products. I was so impressed with them. I think Starclean is the most efficient belt cleaner on the market and it’s an excellent design which is very easy to work with. It is also low maintenance, so the costs make sense to the customers.” 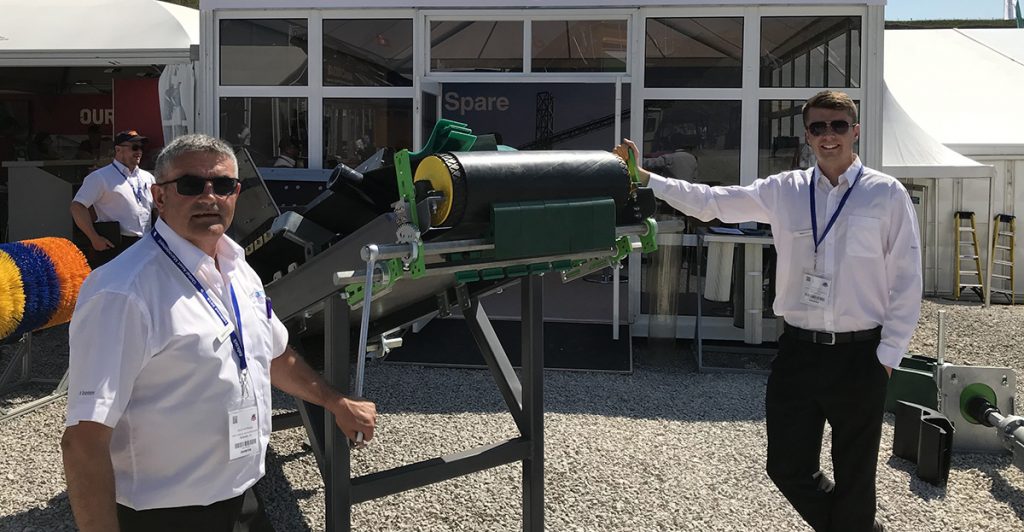 Dave praised his hard-working colleagues for their commitment in ensuring the success of Starclean, Centrax, Spill-Ex and associated products.

“I’m very proud of the team,” he said. “It took a lot of hard work to set up the department and introduce the products to the market, but now we find that people want to speak to us to improve their conveyors – they’ve heard about us and we have a reputation in the industry for not only having a good product but good people too.”

“The important thing for us is that we become partners with our customers through the process of selling the product, then installing and maintaining it. It’s all about improving the performance of the conveyor over the long-term” said Dave.

Starclean, which is manufactured by the German company Schulte Strathaus – one of Europe’s most respected belt cleaner manufacturers – has an ingenious mechanism that helps it operate in a different way to traditional belt scrapers. The cleaner saves clients time and money by reducing conveyor downtime, wasted material, manual handling, clean-up time, dust emissions and health & safety concerns.

It has helped ConSpare, along with our sister company ProSpare, move into new and diverse industries and take on large capital expenditure projects for conveyors.

We are the preferred partner to a wide array of concrete producers, and ProSpare supplies some of the biggest hard rock quarries, cement works, marine wharfs, and recycling businesses in the country.

John Tuckley steps up to lead the Department

Taking over the reins as General Manager of the Bulk Materials Department is senior service engineer John Tuckley, who has been with the team since its conception. He too has spent a large part of his adult life working with conveyors both in the UK and Australia, and is well placed to lead the team.

“I believe that he will do a great job – we have similar ways of working and similar ideas,” said Dave. “We have a saying in the department – get down and dirty- which in a nutshell means get your overalls on, walk the conveyors, identify any problems and issues and look to rectify them – people respect you for it.”

We wish Dave well for the future

Managing Director James Bullock said the company was hugely grateful to Dave for his work in establishing Starclean in the UK market and for building a successful team.

“Creating the Bulk Materials Department meant we could solve problems throughout the entire concrete production process, end-to-end,” he said. “Bringing innovative products to market can take some time and Dave and his team have worked incredibly hard to make it a success, building Starclean into a major brand,” he said.

“His are big shoes to fill as he has such an outstanding reputation in the industry, but John and the team will continue to go from strength to strength. We want to thank Dave for everything he has achieved and wish him well.” 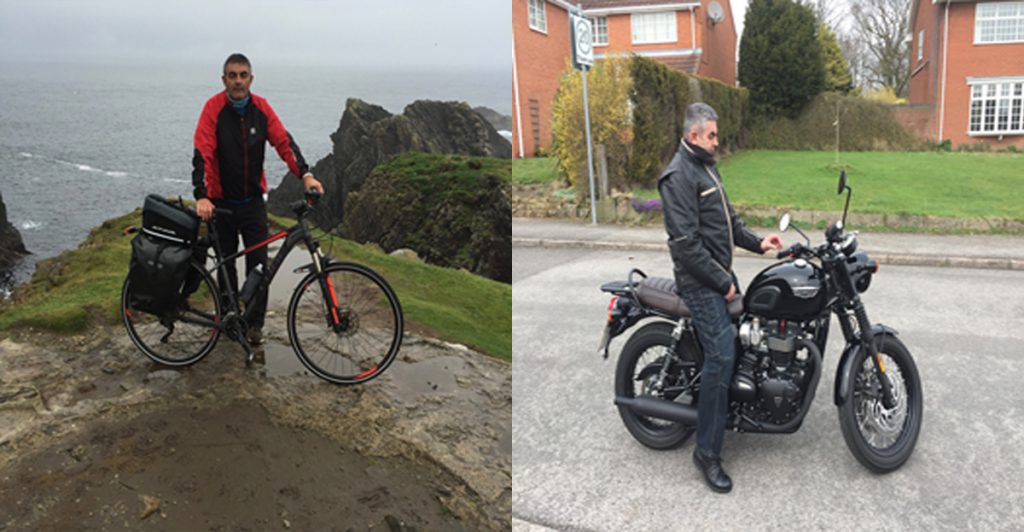 He and his partner Linda, intend to enjoy foreign travel including visiting her sister on the Caribbean island of Anguilla. The couple have five children between them and seven grandchildren, aged from 21 months to 21 years old.

“We’ll certainly keep busy,” said Dave, who will continue to provide occasional consultancy support. “I’ll miss the team – it’s a close-knit group of people and we’ll keep in touch. But the department is in safe hands.”

Clean it, Track it, Seal it – Making conveyors on concrete plants better.

Here, we take a closer look at what you can do to optimise your belt conveyors, for better plant performance.

Here to help in challenging times

We've been working hard behind the scenes to ensure that placing orders with us remains as simple as possible throughout the early stages of BREXIT and beyond.